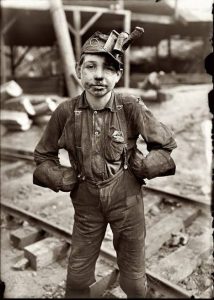 It was a cold winter night. The wind was blowing hard, and the mast’s, we thought they were going break. It was about a week into our boat trip to america when we heard it would be a few more days then they planned. It was just me. I didn’t have any family, both my parents were single children and both of their parent died in a boat crash alongside my mom and dad. I didn’t have any siblings because my parents thought that I was enough. My dad hates me because I was weak and dirty and short. He said I would never be strong enough to work and i would never get married but here I am now proving him wrong by being taken away to some coal mining place. There were other boys there but they were with either a parent or a sibling. A week later we got to america and it wasn’t as pretty as I thought, there was a lot of smoke everywhere and it was a gray stormy and cloudy day so my good expectations for america were gone. I got off the boat in a line with all the other boys I saw before. There were ladies with nurse outfits on putting chalk marks on everyone who looked sick. I didn’t get one but some of the other boys of the boat did. They got put into a seperate line with all the other people who had chalk marks, the nurses said that they were just going I do a closer examination but I knew what they were actually going to do, and it wasn’t pretty. I went through a huge line with all sorts of people from all different countries and all different ages, most of them were immigrants. When I got through the line and I stepped into america, I knew my life was about to change. I first needed a job and the easiest one to sign up for was textil work which I didn’t think it was going to be that bad. After the first week of getting up at 5am and having a 30 minute dinner break and then leaving at 7, I knew i already liked the ship better. The living conditions were terrible and the food was terrible but it was the only food and roof I could get. It was better than nothing but it was still terrible. Everything was dusty and in a week i had already seen two people die. I wanted to get out of this hell hole but I keep thinking of my father and what he would say, so I will keep working there until my arms fall off and then i’ll use my legs to help some how and when those fall off, thats is when i’ll quit, that is when i’ll finally get a break from my miserable life. My only life, my life.

It was two weeks after me and my family came to Ellis Island to get a “better life” after all of my family started working, even my 6 year old brother, I think my family knew that they needed to leave. But since we were immigrants we couldn’t really leave because we didn’t have enough money to go back and it would take us months to save up for a trip back to Italy. We are jewish but since jewish people are treated differently in america, we had to be italian, which we are but, were also jewish. Jewish people were treated like dirt, we were like the food for the pigs, we get poured into the feeder which is a América and then we get eaten up by the greedy pigs who are the rich owners who don’t care about anything but themselves. Me and my brother both worked I the coal mines as hurriers. Since we were small we could crawl on our hands and knees to get to certain spots in the mine others couldn’t. We always came back home with a black silky face like if we were a shadow lurking for a nice warm shower to be clean but they just can’t get it because they are a shadow of what seem to be the greedy pigs. We only got paid a dollar a day. It wasn’t nothing but it wasn’t enough if we wanted to get off Ellis Island as fast as we could and go back to Italy where we had a better life, jobs, family and way better living conditions. I just wanted to be back to the way things were before we decide to come here. I hate it here and I honestly wish I could die in that mine. It would be a lot better then working in one, it would be quick and non painful but working in this mine is slow and painful death.

It was just me, my dad and my brother when we moved to britain, I was 5, my brother 16 and my dad half dead. He was so sick we had to come here to england, it was the only place besides america that had the right medicine but we did not want to go to america after what we’ve heard from our friends back in mexico. My dad had tuberculosis. We found out when he started to cough up blood and start to decrease in weight, really fast, he lost about 50lb in a matter of months. When we got to britain, the first thing i noticed was all of the tall buildings. And a lot of metal, not many things were made out of metal in mexico, actually, lots of things were only made out of brick or wood. We were not considered poor in mexico, we were on the more wealthy side but since we lived in mexico, we could not get a lot of the things we needed for my dad. He needed medicine, proper foods, propper bedding. All the things like that but we only had so much so we had to come here, I was worried. Our mom died because she was depressed, she didn’t have a job and our family wasn’t exactly the most liked in mexico.

“Dad?” I said,
“Stay with us dad” said my brother Michael

Dead, he died, just like that. In that moment I knew I was alone, I had nowhere to go and I didnt know what to do. I could see my brother get red with anger.